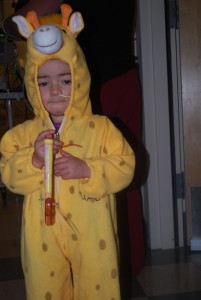 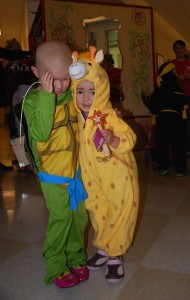 In the Fall of 2010, my 3-year-old-daughter Lilli paraded through the halls of Doernbecher Children’s Hospital dressed like a giraffe. I walked behind her, with an IV bag filled with chemotherapy, as she skipped along with her best friend Bella, who was dressed like a ninja turtle.  Just hours earlier, Lilli and Bella were holed up in their respective rooms, cranky, bored, and feeling rather ill from their treatments. And then, Chelsea’s Closet came to visit, and everything changed.

This wasn’t Lilli’s first experience with Chelsea’s Closet. In fact, the giraffe costume was a special request that Lilli made to CHF co-founder Jason Hicks.  She had been looking forward to that silly costume for weeks. And when it finally came, smiles emerged and laughter erupted.  Dressing up was the best medicine she had all month.

It wasn’t the last time that Lilli wore her giraffe costume. She wore it trick or treating, she wore it to dance in the living room, she wore it out to eat. It never surprised me when we woke up in the morning and she asked me “Mom, can I be a giraffe today?”  I never said no. Pretty soon this became a routine, Lilli wore a costume to every hospital visit. She was Snow White, Jessie the Cowgirl, Cinderella, Belle, Rapunzel, a cook, a ballerina. She danced to her radiation appointments wearing ball gowns that she just picked from the costume cart.  And when she arrived, her nurses didn’t write “Lilli Trippe” on the patient board, they wrote “Snow White” instead, and Lilli loved every single second.

When Lilli passed away, I wanted to do something that would make her proud of me, and I knew in my heart that no matter how hard I tried, I couldn’t imagine a better model for a charity than the Chelsea Hicks Foundation. So I joined their efforts, and as a Board Member, I now have the privilege of working to make CHF a stronger, more prominent foundation. I sincerely hope you’ll join me.