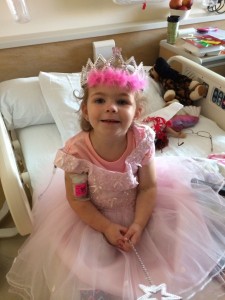 Chelsea’s Closet, a simple name for such a wonderful program. I will never forget the first time we came to know this amazing organization and the beautiful people that run it. My daughter, Addy Jo, had been admitted to Doernbecher Children’s hospital for three days. We did not have an official diagnosis due to waiting on test results. The doctors would not tell us much, other than her blood tests were showing some type of leukemia. Leukemia? Like Cancer? You mean my daughter, my 2 year old little girl, could die before her next birthday? While existing in this fog of not knowing what the next day would bring, in rolls this bright red “Closet”. A volunteer came to Addy’s door and explained that Chelsea’s Closet had arrived, and Addy could pick out and keep any costume she wanted and was able to participate in a parade to show off her beautiful new costume. Addy asked to be a princess. In addition to her costume, Addy picked matching shoes, tiara and a wand so she could be as magical as possible. In no time at all, my daughter who had no interest in anything but going home, now was excited to put on a costume and dance around her room (as much as being hooked up to her IV pole would allow). 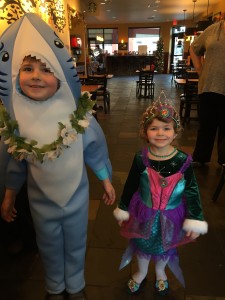 The other magical part? Not only did Addy get to pick out a costume, the folks at Chelsea’s Closet let siblings and friends pick out costumes as well. My son Jerry was there and was able to dress as the ninja.

From this point on, Chelsea’s Closet became something to look forward to during our lengthy stay in the hospital. Due to Addy’s diagnosis of Acute Myeloid Leukemia (AML), we had to stay in-patient , or basically live in the hospital, for four to six weeks for every round of chemo. Additionally, we were only home three to five days in between each of her four rounds. In all, we were residents of the hospital for six months. Chelsea’s Closet was the bright spot during this monotonous routine of blood draws, chemo and all the side effects that occur. Sometimes leaving the room was a lot for Addy, as it is for many patients. Chemo takes a big toll on their little bodies, and just getting out of bed to go to the restroom can be more than they can handle. Having Chelsea’s Closet as a light in the dark could make the difference between a good or a bad day. Addy was blessed to be a multiple recipient of Chelsea’s Closet costumes and sometimes started her own parades when they weren’t there. As she made friends with other children at the hospital, she wasn’t the only child wandering around in costumes all day long. 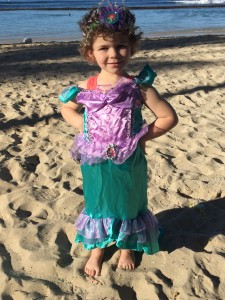 Her new Best Friend Sophia loved to dress up with her as well. Another amazing thing that CHF did was made sure no child was left out. When Addy was in isolation (not allowed to leave her room due to infection), the Chelsea’s Closet volunteers brought a costume to her.

Not only did this organization bless Addy in the hospital, they continued to bless her after treatment. We were invited to their Annual Masquerade Ball. The kids LOVED being able to dress up, eat amazing food and dance their hearts out, all thanks to the Chelsea Hicks Foundation.

Then we were surprised again. Chelsea Hicks Foundation partnered with Make-A-Wish and provided costumes for Addy and her brother. Addy’s wish was to “swim with dolphins and fishies and sharks, and to be a Mermaid.” Make-A-Wish flew our family to Hawaii for a week full of fun, dolphins and fish, and CHF did not let Addy down on the shark and mermaid part. They provided incredible costumes for the kids to take on our trip and add to the fun.

CHF is an amazing foundation that provides one of the most awesome experiences for kids. My daughter’s hospital experience was bearable and my kids were able to be kids and experience genuine FUN, thanks to CHF. My heart will be forever grateful for the happy memories my children were able to experience during hard times as well as during celebration. Why donate to CHF? In time of sorrow, ailing bodies and frustration, CHF was there to brighten the day. In times of jubilation and happiness, CHF was there to join in the celebration! They bring a joy to life that can only be brought when a child expresses their imagination in the simplest way, pretending to be whomever their hearts desire. Why not donate and be a part of changing a child’s life. We are eternally grateful to CHF.